A weekend too beautiful to go un-recorded.
A circular walk, moving away from Clifton on Teme,
via the beautiful and varied landscape. Bright, clear and
invigorating. 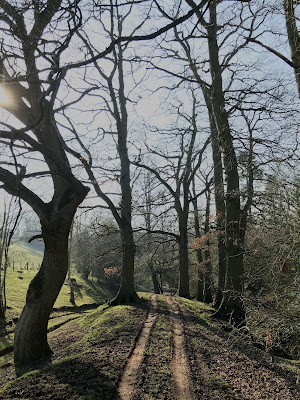 Slow motion video (taken with iPhone).  Played with the sound on, it's interesting to hear how the environmental soundscape is more evocative of a tropical jungle (Listen between 2:00mins and the end of the clip) rather than a narrow and leafy pathway in Worcestershire.
Posted by Gregory Dunn at 01:31

BEING TOGETHER AND BEING SOMEWHERE ELSE - Reflections on a group walk.

I recently led my fellow PhD research students on a walk in Birmingham...

BEING TOGETHER AND BEING SOMEWHERE ELSE
PGR Studio walk across the University of Birmingham Campus, Selly Oak.
Words: Gregory Dunn
Images: Jacqueline Taylor

I had initially thought my plans for a walk across the University of Birmingham campus, taking in two museums, a historical house and its gardens along the way, had possibly been overly ambitious. I couldn't have been more wrong. The people who accompanied me on the day were so keen and possessed seemingly insatiable appetites for new experiences.  I had the immense privilege of sharing the day’s discoveries with some amazing PhD research students from the UK, China, Nigeria and Hungary.  The curiosity provoking pathways, across this small part of Selly Oak, took in the Lapworth Museum, The Barber Institute and Winterbourne House and appeared to provide moments of genuine reverie for all involved. 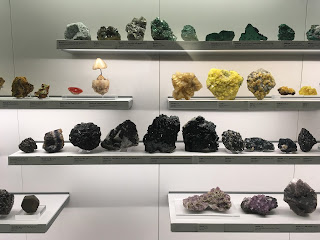 The walk was intended to bring individual PhD students together in a way that would introduce them to like-minded/situationed people and give them a space in which they could do something else, something seemingly unrelated to their academic studies.  My own research activities have revealed that a shared journey (particularly one with a clear and distinct direction) can be a vehicle for relaxation and facilitate feelings of connectedness with people and place.  It was therefore my intention to physically remove them from BCU, temporarily cut the cord with their supervisors and go on an expedition in a new and unfamiliar setting.  The University of Birmingham campus provided the setting for our sojourn, its hugely contrasting architectural styles and exotically named school departments would, in my opinion, provide a place to explore and expand our collective experience of Birmingham.

In applying for the BCU RDF (Research Development Fund) and designing the walk in the way that I did, it had been my intention to facilitate a small and adventurous mobile space, to cordon off an amount of time within which people, from various cultural backgrounds, could freely walk and feel liberated from any overbearing feelings of academic fatigue.  I occupied and performed the role of leader, which in my experience, permits those in-tow, to disengage with a certain degree of decision making and relinquish the responsibility to someone who they perceive to be in control.  My manner, although initially self-deprecatory and nervous at first, developed into a slightly more authoritative style as the day un-folded.  Assuming the lead, instilled me with a sense of responsibility for my fellow walkers; it became imperative for me to regularly articulate my intentions to everyone and nurture a peripatetic structure of trust within which people could feel the freedom to explore without judgement. 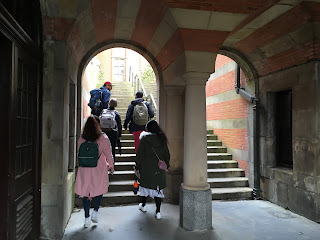 Early in the day, I had explained to the group that sometimes, I enjoy the feeling of being an outsider, a trespasser or an interloper. I explained that, by walking around the UoB campus we were, to some degree, all interlopers, all united by the fact that none of us were enrolled in the UoB and the shared experience of being outsiders was something we all had in common. We freely wandered through the campus, through archways, doors, foyers and balconies.  We were invisible, ignored and camouflaged by our boldness.  We moved amongst other students, we were no concern of theirs, we didn’t register on their radars as we slipped into busy student study spaces. We were unchallenged, ignored, disregarded and overlooked – the feeling was, for me personally, surprisingly liberating. 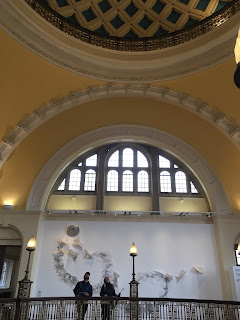 As the walk progressed, I attempted to not curtail the flow of the group’s curiosity. I had previously prepared a pre-defined path, a well-rehearsed trail, along which we would move from one stage of discovery to another, so I needed to keep everyone moving. I was apparently the only one aware of the time; it seemed to have become immaterial to the occasion and my efforts to cut conversations off with a reminder of time’s trivial limits were poorly received.  In hindsight, I believe that this was an indication of the walk’s success; bonds were being formed, dialogue was developing, and deeper relationships were emerging through a sense of shared situation. 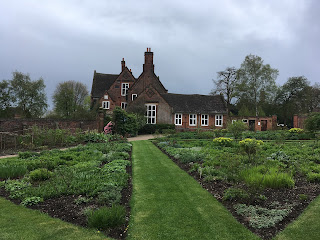 Our ultimate destination was Winterbourne House, a house built in the Arts and Crafts style, owned by the University and free to UoB students.  As with all the locations, I chose not to research the place too much; I wanted to take the group to the door, pass through the house and let them spill out into the walled Victorian gardens beyond.  They were then free to discover the place for themselves and once again, play within the walls of permission and have fun exploring within the limits of trust.  The cross-cultural exchange that occurred within the carefully curated space of the walk was facilitated by the commonality of the journey - the shared and galvanising experience of being together and being somewhere else.

Greg recently completed an AHRC-funded PhD with BCU and joined the PGR Studio team, as Research Assistant, at the beginning of April.  His research interests are currently eco-haptic perception and sociable mobilities of walking. He is a qualified Mental Health First Aid Champion and has joined the team to formally provide 1:1 pastoral support and resource signposting for all doctoral students.

My 'Handscape' (marked by the red arrow in the image below) is currently being displayed in Mino, Japan. The paper was made in the local area so it's nice to see it back where it belongs.  I feel priviliged to have my work in such a show. 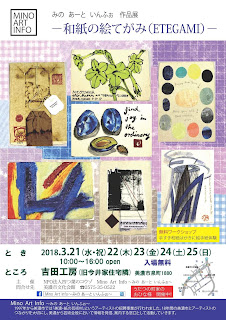 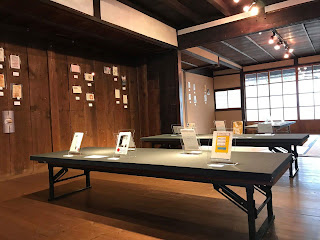 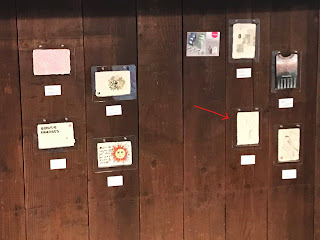 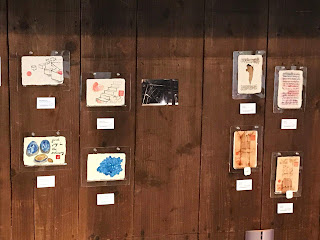 【-WASHI ETEGAMI PICTURE LETTER -】
A new exhibition, “Washi Etegami Picture Letter” will be coming up soon from 21st March to 25th March 2018. The exhibition will showcase Handmade Paper Etegami works of art by artists, painters and others connected with Mino City including participants to “Mino Paper Art Village Project.” (1997 – 2016) More than 50 Etegami art works by the creators touch people’ hearts.
Etegami (e means picture and tegami, letter/message.) are simple drawing accompanied by a few words. Usually done on postcards to be mailed to one’s friends.  A free “Etegami workshop” is also part of the exhibition this time. A great opportunity to use elegant handmade paper! We’re looking forward to your participation. Anyone will be welcomed. You’re not good at it? No worries. An instructor will be there to help you.

Thanks to everyone’s help, this new exhibition has made us, “Mino Art Info” feel some achievement of our mission to help people, artists connect each other with the aim, “Connect.”  Please come enjoy this beautiful works of art at the Studio Yoshida, Mino.
You can also enjoy the Hina Doll display at the same site.

Must have made an impression...upon me. 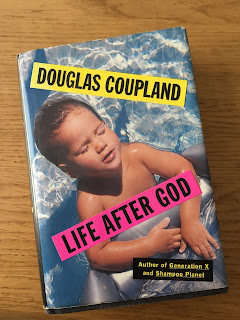 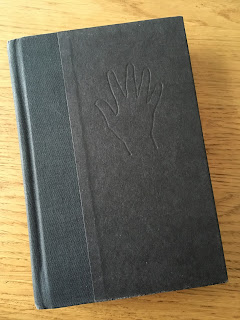 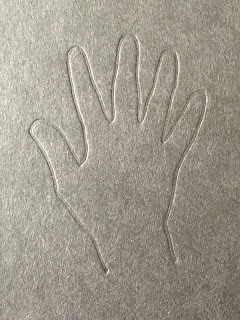 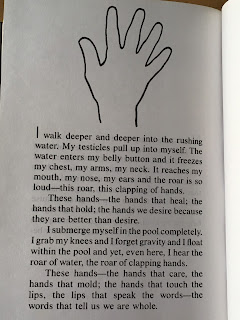 Thanks Douglas
Posted by Gregory Dunn at 03:50 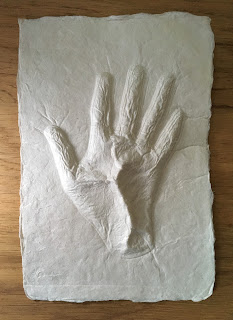 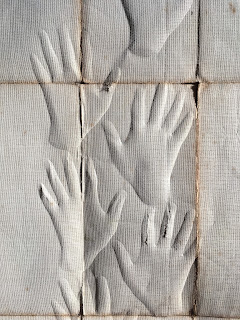 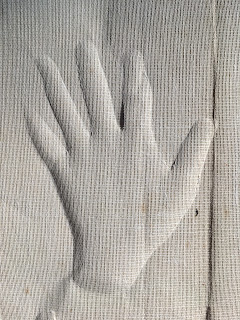 This living hand, now warm and capable
Of earnest grasping, would, if it were cold
And in the icy silence of the tomb,
So haunt thy days and chill thy dreaming nights
That thou would wish thine own heart dry of blood
So in my veins red life might stream again,
And thou be conscience-calm’d–see here it is–
I hold it towards you.
John Keats 1795-1821
(Thanks to Rosie Whitcombe at BCU)