Remember Who and Where You Are! 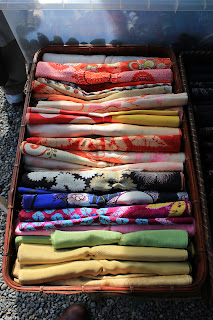 This colourful, but rather innocuous, photo has an story behind it. Taking it, reminded me that i am a guest in Japan and I shouldn't forget that fact.  We were kindly driven to the Gifu Flea Market on Friday morning by Suda San who works at the Cultural Office. He was accompanied by Mrs Haba, the wife of Haba San, the paper lantern expert and maker. We were driven to a temple in the centre of the city, Temples are often the sites of Flea Markets; I have been to several over the years and they have always been held at holy sites.  There were already masses of people milling around the stores, mostly older people and plenty of people who looked to be bordering on being homeless were present.

I took out my digital SLR camera, photographing random objects and textures, as I usually do; being careful not to photograph people who are too close, (as I feel, most of the time I should ask for permission first).  So I began photographing rolls of old kimono fabric.  Kimonos are often broken down and recycled in Japan; people use the scraps to make everything from new clothes, coasters and kids toys.  The images were vibrant and pleasing, particularly in the morning sunshine, (still hard to believe its November here when its nineteen degrees some days).  All of a sudden, I am startled by shouting.  Loud voices are generally heard in happiness, the sharing of a joke, or the enjoyment of food etc.  So it literally took my breath away when I realised the shouting was directed at me!  I was horrified, embarrassed and tried to muster up an apology somehow, (one of the only phrases I have learned during my time here).  The guy who had raised his voice toward me was now shouting at me to stop taking photographs, (I think).  He didn't desist.  I sloped off.  I felt so bad, gutted that I had offended someone, that I had broken the rules somehow.

This is the first time I have upset, or been upset by, anyone whilst living here.  I am pretty clued up on a lot of social protocols in Japan and I seemed to have avoided ruffling anyone's feathers, (to my knowledge anyway).  You see, the Japanese seem to expect us to F@£k up.  We are generally excluded from blame because how could we possibly know the rules, the 'right thing to do'.  However, this was a wake up call for me.  Even if the guy was 'Del Boy' market trader enjoying embarasing me in front of his peers, the incident reminded me that I am a visitor, bound to get something wrong even if I try really hard.  Up until this point, I have felt totally safe in Japan, totally free from harm.  Mino City, (but Japan in general in my experience) is very safe. People leave their cars and houses unlocked.  Children walk home by them selves, without their parents.  It seems ludicrous to have security staff at the Hyper Market or CCTV cameras in the bookshop; nobody is going to steal anything or do anything out of the ordinary.

I am so obvious, wherever I go, I know, people are looking at me, maybe not directly into my eyes, (well actually kids sometimes do; they point. They call me "Gaijin").  As I pass adults, I can see them gawking, their reflection in a window or mirror.  I have caused people to drop things, nearly crash cars and stop in their tracks.   I have been passed by cars and motorcycles three or four times within minutes, people wanting a second, third or fourth look.

I craved my anonymity for the rest of that day in Gifu. I hankered to be invisible and not a virtual celebrity, being driven around in the back of a local government van  Japan will suit you if you're an extrovert, if you like being looked at all the time.  It'll make you feel special in a superficial way, you're seen wherever you go.  I thought I was extrovert before I left the UK, happy to sometimes be at the centre of things.  But if one day, you feel shy, feel as though you would like to be left alone, there aren't many places you can go to enjoy the feeling of solitude.  I do have places I can go to be myself; I hadn't realized just how important this aspect of my personality was.  I occasionally need space to function properly - to allow people back in, to 'restore' myself.

Living in Japan for two months has taught me that I am a fee paying guest like every other westerner.  My fee has been my creative privacy and my personal anonymity.  Using the internet to publicize this trip is one thing, I  have a certain amount of control there.  But just by leaving the house in Japan, you are open to scrutiny, observation and judgement. I am learning to accept this because the cost is massively outweighed by the rewards.
g
Posted by Gregory Dunn at 04:13