"Escape your desk or studio for an hour and join us for lunch. Everyone is welcome. We have an array of tea, coffee and herbal teas – all you need to bring is your packed lunch.

At this lunch club ESP member Gregory Dunn will share his experience of being artist-in-residence in Japan. Gregory is a mixed media artist concerned with material thresholds and the extent to which physical margins can be stretched without breaking. He is currently studying on the MA Fine Art at Birmingham City University. In 2012 his interests motivated him to spend three months in Mino City, Japan, learning how to make Mino Washi (handmade paper made from Asian Mulberry trees) on a locally funded group residency. At this Lunch Club Gregory will informally share information on how he applied for this residency, what he learnt in terms of cultural history and technical skill of the Washi paper in Japan and how the experience affected his practice. This event is designed to be a sociable discussion, open to all."
g 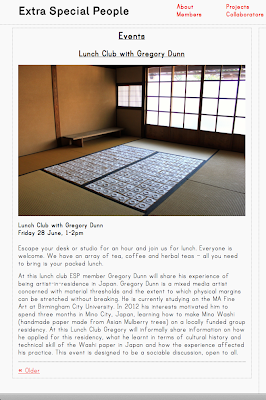 I am currently working with the 'BirminghamMade Me' Envisioning Brand Futures group.   It's a Birmingham City University led project and is an opportunity to work with respected Midlands based cycle companies, such as Pashley and Brooks. This might seem like quite a departure from Fine Art but I am interested in approaching the scheme in a way that engages my interest in materials, process and the effects these have upon human experience. I am also getting paid for my efforts, which is a big bonus, because things are getting tight, money-wise.

On Saturday 13th April I visited the Bespoked Bristol custom bicycle makers show, held annually at the Old Brunel Exhibition Hall near Temple Meads Station.  Here is the write-up I submitted to the other members of the group:

On Saturday, I had the pleasure of getting the (unusually prompt) train to Bristol to visit the third Bespoked, custom bicycle builders fair. I visited the inaugural festival back in 2011, held at the Paintworks Bristol. At the time it felt like a busy (but initially an overly niche) affair with a few hardcore bicycle and accessory manufacturers in attendance. The quality of the construction was beyond the realm of my technical comprehension, the attention to detail was extraordinary. I came away from the show feeling energised, impressed with the technical ability of the attendees of gagging to get home and ride my bike.

My expectations were high for the 2013 event. Brunel's Old Station at Temple Meads seems a really appropriate new venue for the show (actually, 2012 was the first year at the venue but I was unable to go). The pale Victorian grandeur of the interior space beautifully re-enforced the manufacturing heritage, so obviously admired by the cycle makers inside. There were small bannered stands closely packed into the hall, stick thin tubed bicycles were delicately balancing upon their raised stages. There were also, heavy duty tourers on show, bamboo bikes and beautifully (machine?) carved wooden apparitions with unbelievable curves. Chrome, leather, titanium, aluminium, rubber and steel were in full effect. Turquoise seemd to very popular, as did beige and black.

I enjoyed people watching as much as bike watching. It was obviously a male majority affair but there were visibly more women at this show than in 2011 and not just in a token way (reluctant wives or partners). Women were present behind the stands, leering over the metalwork with their partners, friends and family-seemingly really enjoying the display. People were unable to resist from touching the bikes. I saw many a sneaked feel of a saddle too...Brooks saddles were everywhere. I was unable to do a bike count, (it got REALLY busy) but I guess Brooks were on 60-70% of the bikes at the show. Brooks occupied a central position and had made an effort to bring along just about all of their product line, everything from handlebar tape, saddles, (of course) leather bags and leather treatments, as well as rain macs and brochures etc. I circled the stand a number of times and observed the different people checking out the beautifully finished items on display. People of all ages and backgrounds seemed to be approaching and ’feeling’ the items. Brooks products are very tactile. They seem to invite haptic interaction.

I joked on the day (in a couple of tweets) that I had spotted moustaches and beards on the way to the show - the symbol of the 21st century hipster was everywhere. Mostly young men sported facial hair, many older men were folically challenged on top. There were plenty of tattoos - piercings too. Hard wearing utility fashion, check shirts, Levi's and Red Wing Boots were a common site. I heard couple of thirty-something blokes discussing retail: “I've left my credit card at home on purpose, so I don't buy anything” other bloke: “i didn't, I'm fully loaded, I'm not leaving here without buying something!” It was a good mix of ages but low on cultural diversity. It did feel good-natured, exciting and far less specifically targeted than the 2011 show.

It was great to see people had actually cycled to Temple Meads, it was raining Saturday so it seemed doubly impressive. It might have been odd, people walking around in lycra, but to me, not too unusual, I've been around runners, cyclists and cycling in one form or another most of my teen/adult life. I do like the sound of clicking cleats on the ground, when I hear them, wherever I am, I always turn to check the bikes, (and labels) worn by the guilty parties.

Lance Armstrong wrote a book once called, 'It's not about the bike ' (snigger) Well, of course for him, that might have been the case. At the Bespoked UK Handmade Bicycle Show, it's ALL about the bike. It's all about the look, the detail, the accessories, the technology, the heritage, the material and the security that these things supply the owner. I guess, instant external validation from your well informed peer group what is important to a lot of ’punters’. But being happy, knowing that you own the best (that your hard earned) money can buy, especially if it's been made to fit your peculiar proportioned body is a luxury people seem to still be able to afford.

The show revealed to me that more and more people are engaging with a world beyond the physically inadequate internet and the predictable consistency of their TV's.  People seem to be craving a tangible physical connection with the world and to feel resistance pushing against their bodies (not just their minds). The way the bicycle frames are constructed echoes and perpetuates the material expression of humanity's haptic hold over 'things' and, from what I saw, they beautifully compliment humans innate desire to move into real, (as opposed to) imagined space. 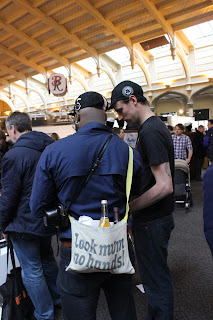 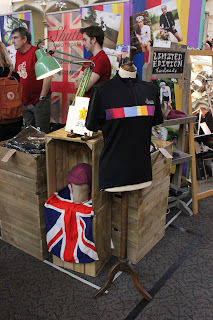 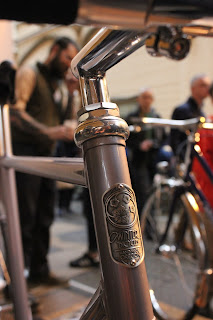 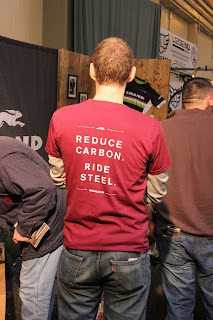 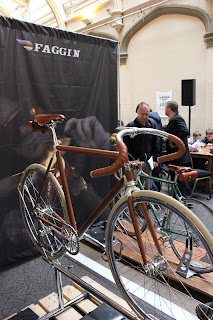 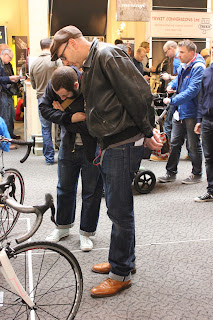 Buck Rogers has a lot to answer for...

The late seventies TV series, Buck Rogers in the 25th Century provides me with clues to my love of 'cinematic space'.  Watching it as a 9 year old child, I used to completely engage with it's plot and dazzling visual spectacle.  I was Buck Rogers every week and enjoyed all the spoils that he was entitled to as star of the show (read into that what you will).  Being my own personal, personality 'terra-former' - I learned my ethical standards from him, my moral code was informed by his (often dubious) actions - It's no wonder I had strange ideas as a teenager as to the role of men in society. I had a kind of 'Surrogate Oedipal' relationship with the stars of the show - maybe I wasn't the protagonist, maybe I saw Buck Rogers and Wilma Dearing as parents, maybe that explains my childhood crush on Erin Gray or should I say, Queen Jocasta?

The poor quality screen grab below is taken form the Star Fighter launch sequence.  It's a beautiful neon lit scene and the virtual movement was undoubtedly created inside a scale model set, (Special effects were a childhood obsession too).  Whilst watching Buck Rogers I would construct my own space ship models from LEGO (not even looking at my hands whilst I did it) - not only were my visual and aural senses sated, but my haptic abilities were honed and informed by the illusion of real space and the shape and position of things within that environment.  To my 'mind' I physically occupied the world beyond the barrier of the television set - I had a 'presence' there and that space now has a presence in me.
g. 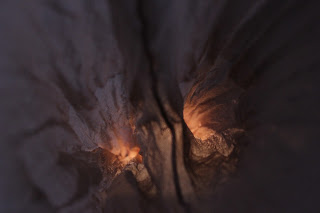 Here's a short sample of my sound and vision experiments.  Think films like 'Fantastic Voyage' (1966), Eraserhead (1977) and 'Alien' (1979) and you'll see their influence.  The soundtrack is more immersive with earphones and the sense of foreboding is increased. g.

"In Praise of the Sci-Fi Corridor"

I though it was just me that had a penchant for the corridors found in Sci-Fi movie environments.  Martin Anderson at 'Den of Geek' has written a rather comprehensive listing of these intriguing spaces. The connections with my own work are obvious.  I have spent a lot of imaginary time in these worlds - it intrigues me to know...why? 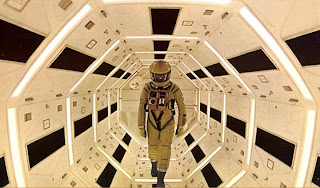 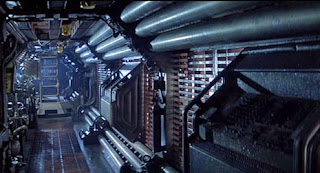 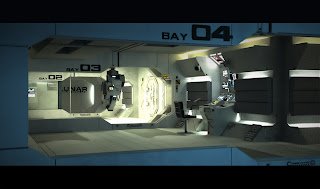 “In Praise  of the Sci-Fi Corridor”
Posted by Gregory Dunn at 06:44